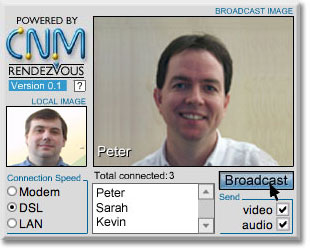 This was our first version of a meeting application using the Flash Communication Sever MX.

It was built around a lot of the included Flash Components, so that we could quickly get the idea of how the concept would work.

This first prototype was multi-party audio and video. You held down the broadcast button to send out your audio/video to anyone connected.

You could see yourself, so that you knew what you would send, when you pressed the button, but not much else. The idea was to stay as minimalist as possible.

A later version of Rendezvous - starting to look a little more like the modern Flashmeeting Project application! (2004) 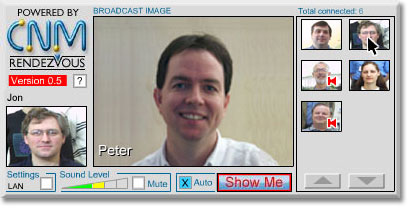 By the time we had reached 0.5 we had realized that users wanted to see pretty constantly, at least something, from all connected users. So this version had slowly updating thumbnails from all cameras. Only one user 'held' the video-broadcast central part of the applet; but all users could talk at once. We changed the broadcast button to be show me because it just meant that you wanted to be SEEN as the main speaker in the middle of the applet.

The auto button tried to detect the speaker, to give them this 'core' position; and as your audio was sent automatically when it was detected, you needed to see the 'levels' and be able to 'mute' your mic.

The thumbnails gave you feedback on who 'did not want to speak'. The screenshot here shows two such muted users.

Users all needed headsets to avoid terrible feedback problems - so clearly, the smiling faces you see here are all faked!

The Flashmeeting Project application - version one (2005)

Apple released a new networking technology called Rendezvous, just as we were ready for the big version one launch - so we needed a new name for our concept!

Version one saw the first BIG design decision to simplex audio. No longer could users speak over each other! Only one-at-a-time could 'take the floor', others needed to queue politely. Simplex meant no feedback problems with open microphones and speakers. And it supported 'scale': the load on the system was pretty much the load of one person speaking (plus thumbs). With many more folk in a meeting, you now needed a 'list view', for all the names - and also useful for 'low bandwidth' users.

The second BIG design decision was that all meetings were booked against a time-slot. The booking generated a unique meeting url, and allocated server resources to ensure that it would work, when multiple meetings were running at the same time.

The thumbnails reflected a green outline, for the current speaker plus the queuing 'hands up'. You no longer needed a 'self image' as your own image always took the first thumbnail position. You could see your booking time 'ticking away' down to zero.

Still, the screen footprint of the applet was as small as possible, and it was as simple as we could make it. Everything we could add from here would cost complexity...

The version 'two' release reflected a reluctant move to add some very useful features, at the cost of some of the earlier version's simplicity. You could now see your own audio-level, running down the side of the 'broadcaster' image. At the top next to the countdown appeared who was next in the broadcast queue.

The first critical addition was public text-chat, that all could see whilst someone was speaking. Even if only one person could 'speak' at any one time, it seems that fifty folk can text chat at the same time as each other! AND it turns out that meetings get MORE effective with this! Strange!

The screen foot-print had to 'grow' to cope with this important addition.

Now, even our little v1 'spanner' icon had to have a 'prefs' tab of its own, to cope with all the aditional user set options.

BUT it turned out that the BIG feature of version two was part of the pay-off from connecting each meeting to a unique url address. You cannot see it in this interface, but events can be efficiently and automatically recorded for instant replay against that unique url address. AND because of simplex broadcasting, we can produce an excellent and easy visualization and replay applet for the recording. 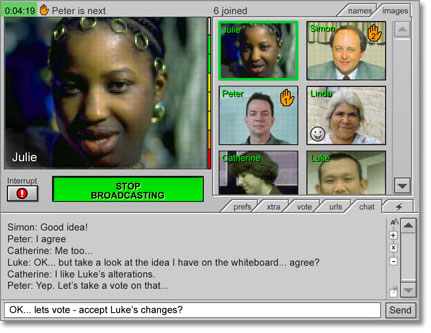 This is the current 'release' version.

Some of the new features include, a shared whiteboard, private text chat and file upload and download.

Users have the option to 'sign in' to the meeting to access the major new features, or join without 'signing in' and have the basic 'feature set'.